the planet and the economy
Environmentalism

How environmentally conscious is Germany? 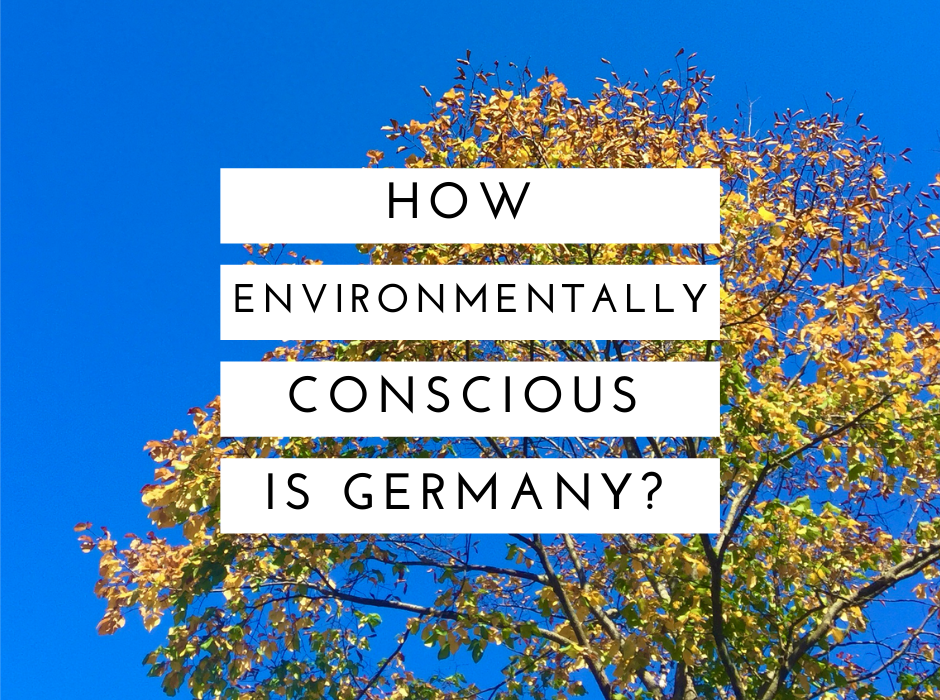 What’s your first impression of Germany? If you know a little bit about the country and its people, you might have the impression that they are very environmentally conscious. Germany is known as a world leader in recycling, emits less carbon per person than countries like Canada, the US or Australia (though more than other European countries), and was one of the first countries to submit a long-term climate action strategy to the UN as required by the Paris Agreement.

An interesting dichotomy, however, exists in Germany between this reputation as an environmental leader and the reality of the booming automotive industry. There’s also that small detail of VW emissions scandal, and the pride and joy that many people taking in owning cars and driving fast on the autobahn.

Interestingly enough, when it comes to certain environmental issues like recycling, Munich is a bit of an exception. Unlike other large German cities, plastic, glass and aluminium recycling is not picked up from your door in Munich. General waste, paper and compostables are picked up (hooray for door to door compost pick-up!), but for the rest, you have to walk to somewhere around the block to dispose of your recycleables on what are known as “recycling islands”. Here, there are several enormous yellow containers into which you sort your various materials.

This means that it’s not quite as easy as having all of your recycling picked up from your house or apartment building. I’ve noticed that some people here are active recyclers, but others deem it too much effort to have to walk a couple hundred meters and back with all of your things and recycle them there. Because of this, more recycleable plastics end up in the general waste stream in Munich compared to other German cities.

Before coming to Germany, I thought I was a very environmentally conscious person, but since being here, I realised that I had certain culturally ingrained personal habits that were actually kind of wasteful. For example, I always took air conditioning and using a clothes dryer for granted, without ever thinking about how much energy they use.

In contrast, I’ve noticed that many Germans do tend to think about this, and prefer not to have air conditioning, a clothes dryer, or even a big fridge/freezer because of the amount of energy that they use. Part of this may be due to the relatively high price of electricity here compared to other places (e.g. the United States), but I think a good deal is also due to a desire to do good for the planet.

Germany also has a relatively successful deposit system for plastic bottles, beer bottles, and aluminium cans (though unfortunately not for wine bottles). When purchasing, a deposit (known as Pfand) of between 6¢ to 25¢ is paid, and later returned to you as a voucher when you bring your bottles back to an automatic machine in the supermarkets. Or, as is often the case, you may leave your bottles/cans out in the streets, beside a trash bin, or deposit them directly into the hands of one of the many Flaschensammlern – bottle collecting people – who roam the parks and streets, on bicycles with a massive load of recycleables that they trade in for a bit o’ coin. You can consider this your donation to these quirky, somewhat downtrodden folks who make their money by scouring the streets, cleaning up the city as they do it…

With regards to power generation, Germany has pledged to phase out nuclear power by 2022, and move towards primary green energy sources. While a good deal of controversy over nuclear power remains, with some arguing that it is actually cleaner and more sustainable than other renewable energy sources, due to its “effectiveness to waste ratio” (term coined by me), it seems that the country has good intentions when it comes to being greener.

Overall, I admire the pragmatic, and evidenced-based approach that Germany generally takes to issues like the environment. Compared to many people that I know in Canada (with the exception of the generally earth-loving people in British Columbia), I think Germans are on average more environmentally conscious. The data seems to agree as well, with Germans producing about 10 tonnes of CO2 per capita on average, compared with about 15 tonnes of CO2 emitted by the average Canadian.

Is Germany perfect? No. But what country is?

What do you think? Is being environmentally conscious important to you, or do you feel there are more pressing issues to worry about?